I know that the title is a bit brave but we have been testing both Affinity Designer & Affinity Photo for a while and we are absolutely gobsmacked. Let me start by saying that this software has been produced by the company called Serif and both programs are the best competitors for Adobe’s Photoshop and Illustrator (in our opinion… ).

Since Adobe got its customers hooked on subscriptions in 2014 we have been looking for good alternatives. Simply because as a business you should never restrict yourself to only one software provider.
As a Web and Apps development specialists, we have been looking for software that can in some stage replace Photoshop, Illustrator, InDesign, AfterEffects, Xd and Dreamweaver. Obviously, if we can save some money in the process that would be a bonus.

I know, most of you would ironically say “Good Luck” knowing that if you want to be professional in designing websites manipulating images or creating icons for apps you need to use the Adobe.
Well, not any more…

Let me tell you about our experience using both Affinity programs: 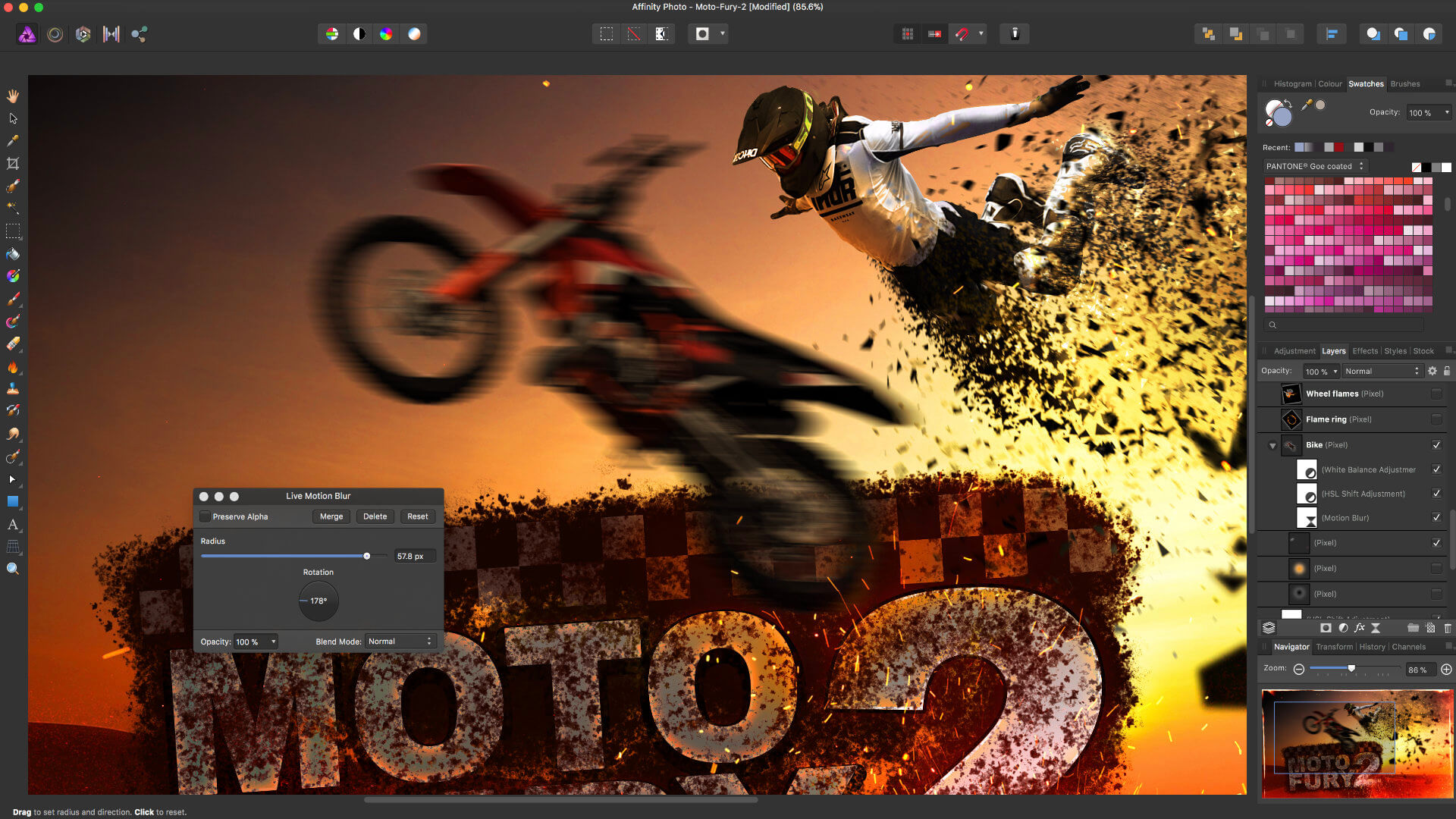 For the last few months, we have been testing software like Sketch, GIMP & Corel Photo-Paint. There is nothing wrong with them and it would be wrong to say that they’re bad. However, they all involve a steep learning curve.

We all know the biggest downfall of a new software is to learn how to do things. We had to learn new ways of editing images, optimizing them for the web and adding various effects like shadows or shades.
Fortunately, a few months back we have decided to purchase Affinity Photo and all those problems have disappeared. Affinity Photo interface is similar to Photoshop and most functions we used are identical. Affinity Photo is fast, in some cases, its even faster than Photoshop and smart default layout will let you access the effects tab with just a one clink 🙂 .
The support from the Affinity Team is just great. They’ve usually respond within 60 min and never longer than 24h. Apart from that, you will find a lot of tutorials and forums that will tell you how things are done in Affinity Photo.

All this for just £48. Individual licences – same as old Adobe Software -wow! 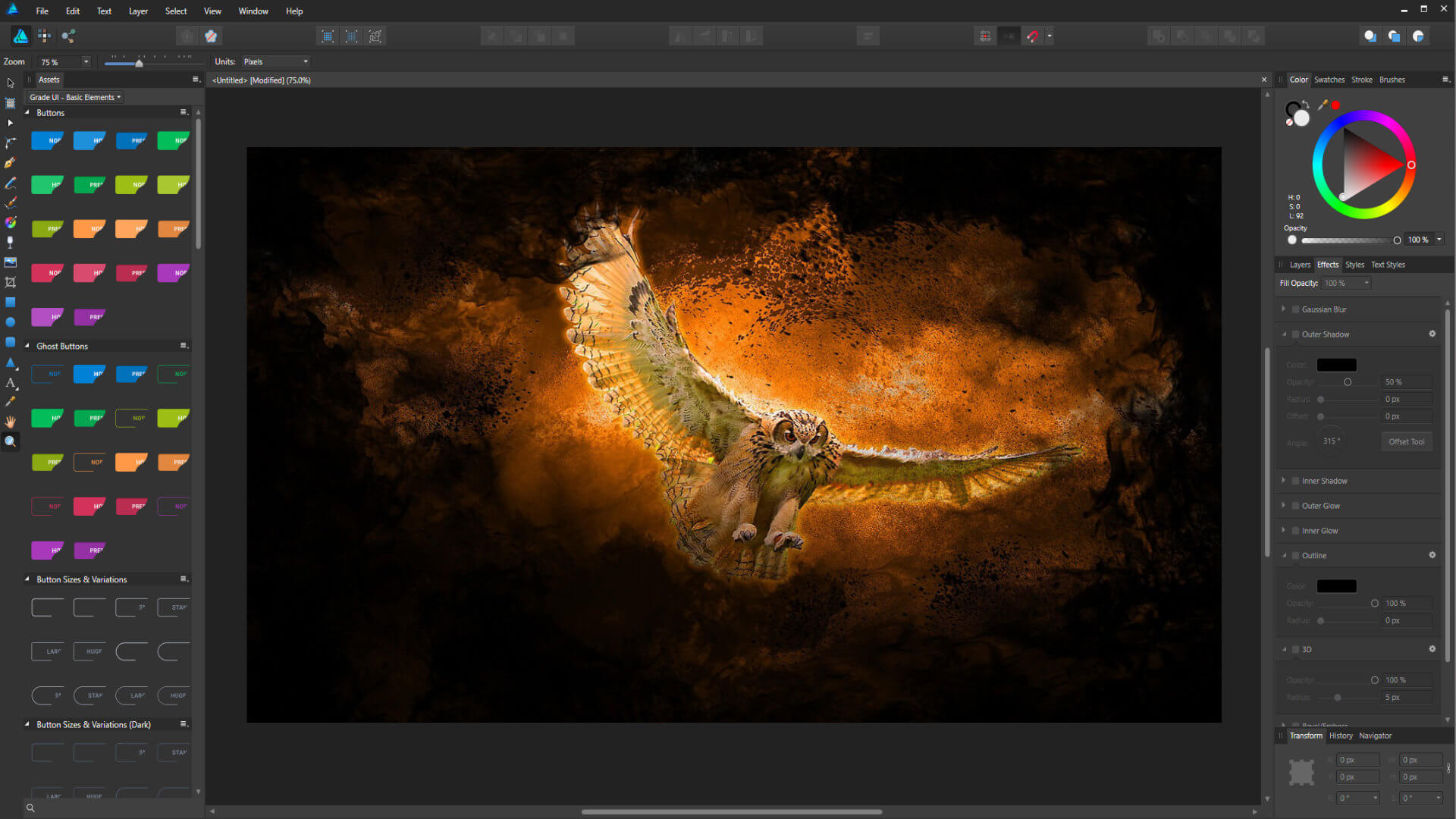 For the Illustrator alternatives, we have tested Corel Draw and Inkscape. Again, both good, but the aim here is to find the best Illustrator alternative!
The Affinity Designer is no different than Affinity Photo in terms of performance, and its interface is similar to Illustrator. We have recently created the London map in dotted pattern and transferred the file from Affinity to Illustrator and vice versa with no problems. This App in its layout is similar to Illustrator, even the keys shortcut are identical. This really has been created for us to have a smooth “migration” process. We haven’t tested the Designer for 3D graphics but please bear in mind, this review is for web developers and we’re using this software for editing web graphics (in most cases).

Same as the Affinity Photo the Designer price is just £48! 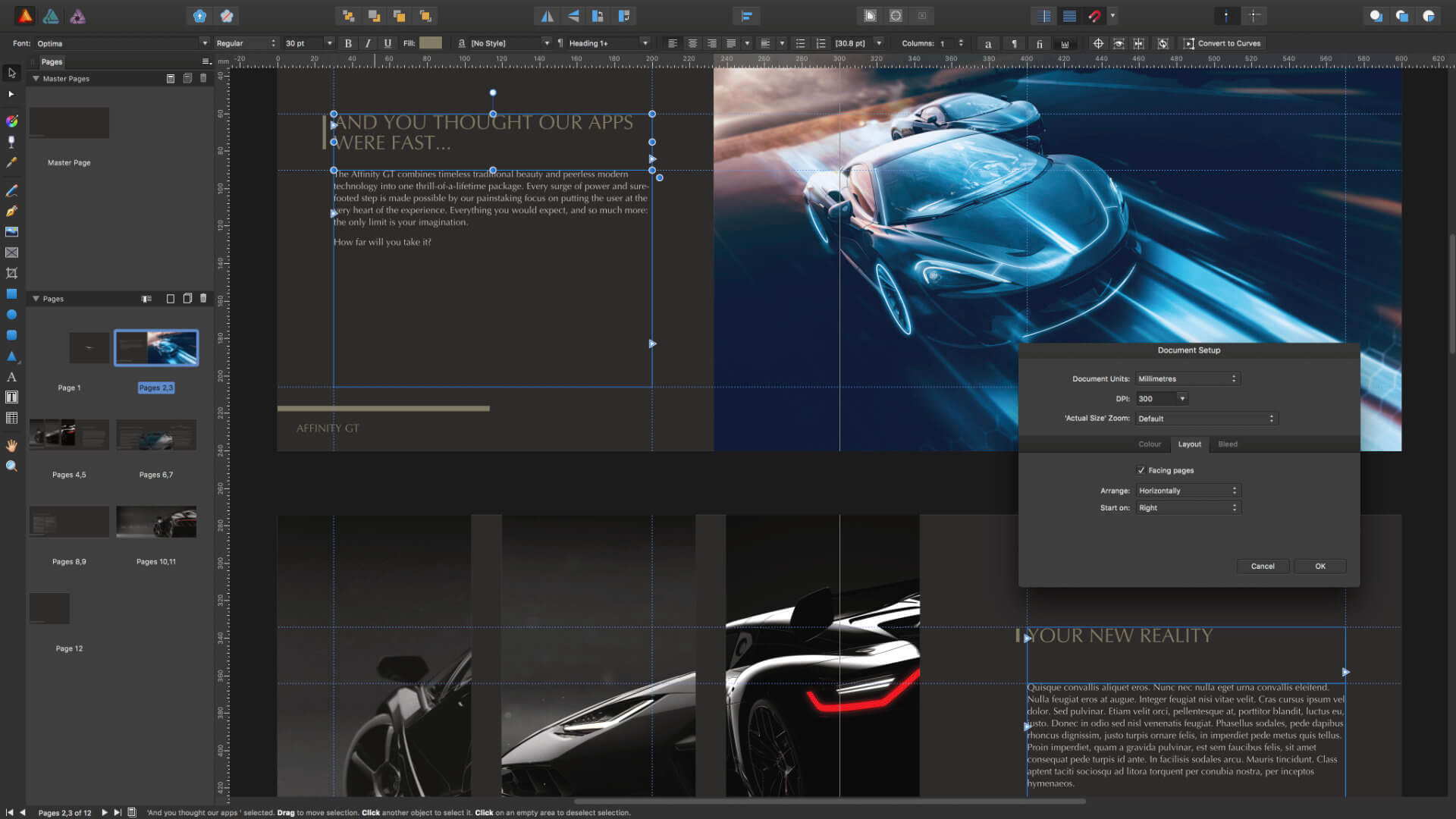 Can’t say much about this product at this stage as it is still in development. However, yesterday we have received *Affinity Publisher Free Beta version which we will test and give you some feedback.
From forums and various social media platforms, we have found out that Publisher will be a direct competitor to InDesign. This will make Affinity even more of the competitor to Adobe.

Some of you may read this post and say “How about all the other software? I can’t quit the Adobe subscriptions because you are still using the InDesign and Xd or Dreamweaver”. Yes, you are correct, but let me give you an example. If you have 5 developers/designer which all need to use Photoshop/Illustrator/Dreamweaver/Xd/Aftereffects/InDesign and PremierePro why don’t you keep one Adobe subscription and purchase 4 Affinity licences? With the right work spread, you will archive same results saving yourself at least few hundred pounds!
Are you thinking now, about the replacement for Dreamweaver? How about you try the Visual Studio Code?
I’ll give you more details about VS Code next week.

To sum up, we are really looking forward to seeing more from Affinity. It would be great to get our hands on new Publisher and even better if their next project will be for video editing software! For now, we can all encourage you to have a go and try Affinity products, save your self a bit of cash and enjoy reading our posts.

This news item was created by Tom

We collect your information Only with your consent; we only collect the Minimum amount of personal information that is necessary to fulfil the purpose of your interaction with us; we don't sell it to the third parties, and we only use it as this Privacy Statement describes (in line with GDPR legislations EU/UK). Show Full Privacy Policy

Simplosoft will only collect and use your personal data for the purposes that we tell you about, when you share it with us.

The Information We Collect & Why

We will request your personal data to follow up with your enquiry and provide you with relevant information. If Simplosoft requires further personal data direct from you, we will inform you why we require it, with whom we may need to share it, for what it will be used and how long we intend to store it.

How we process the data information

We will hold your information in our database only for internal development purpose and prior to the written agreement confirming that we can develop website/applications based on information provided. Pass the development period the information will be deleted permanently unless advised other ways by you - our customer.

How long we will keep it

If you have used our ‘general enquiry’ service from our website (simplosoft.co.uk), we will respond to you directly and then your personal data will be discarded. If you have contacted us and have requested that we keep your details on file or the details passed are used for development purpose for example App Development that connects to the internal database with personal details and the contact emails. We will ensure that we confirm with you each time we approach a new stage of development that you are happy for your data to be withheld. Once the development process is completed we will remove your stored data within 6 months. Furthermore, the new database will be passed to you so it can be stored for backup purposes. Simplosoft will ensure that all personal data supplied and held, will be in accordance with the General Data Protection Regulations (25th May 2018) and the Data Protection Act 1998.

What you should do if incorrect

If at any point you believe the information we process on you is incorrect, you can request to see this information and even have it corrected or deleted. If you wish to raise a complaint on how we have handled your personal data, you can contact us using our Contact Us Page.